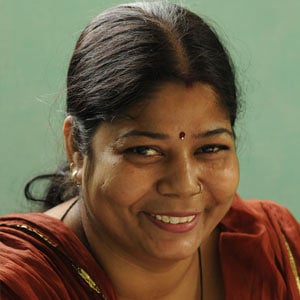 Lakshmi is named after the Hindu goddess of wealth who is said to bring good luck and protection to her devotees.  The Lakshmi of the Didi Jewelry Project lives up to her name.  She is a strong, supportive mother to her two sons and a rock of support for the other Didi ladies. She is always encouraging and supporting them, whether it is forcing them to eat more food to stay healthy or helping them see the bright side of their harsh realities.

Her oldest son, Rohan, was born with Thalassmias, a disease that requires regular blood transfusions.  When very young, he contracted the HIV virus during a blood transfusion.  This is common in in India and a devastating reality.  Rohan falls ill often and needs many medical tests and blood transfusions.  Undeterred by Rohan’s condition, the family is filled with an overwhelming amount of happiness and love for one another.  With Lakshmi’s income from The Didi Jewelry project she is able to pay for Rohan’s treatment.